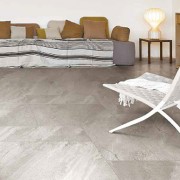 24″ was available, but was mostly a novelty at the time, with few customers. Now we’re almost halfway through 2015.
Ultra-thin (1/8″+) porcelain panels up to 5’x10′ are available from almost all distributors. Requiring new cutting and handling equipment as well as special adhesives and specific installation techniques, ultra thin porcelain has been slow to catch on residentially. However, traditional porcelain tile has been growing to larger formats as well.
The best selling size by far is 12×24, but we are seeing tremendous interest in 18″x36″ and even 24″x48″. We have over 20 selections of each of those sizes on display in our showroom.

But the most dramatic has to be our piece of 48″x48″ porcelain tile (not ultra thin). 16sf in a single tile—amazing!

We have two installations of 24″ x 48″ in our showroom—you’ll be amazed how it works well even in smaller rooms.
Smaller rooms with less grout joints give a more sleek contemporary look. 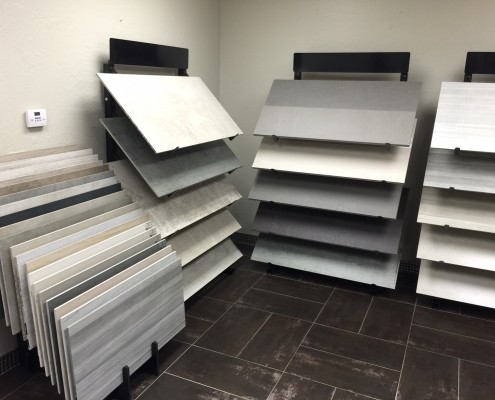 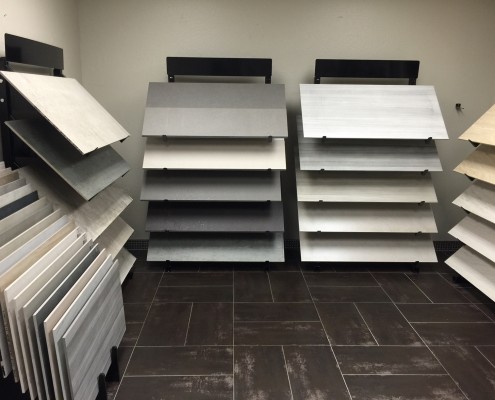 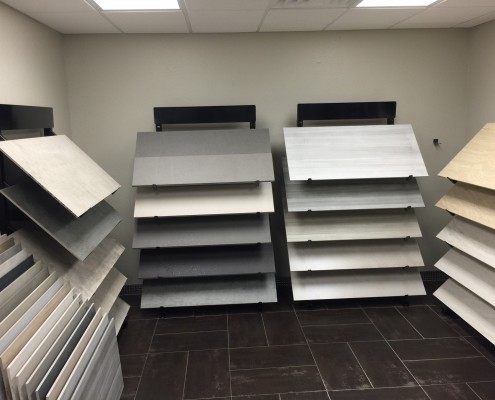 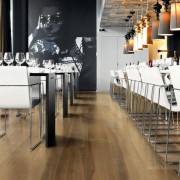 Like many of you, we at Villagio Tile and Stone have been shocked by the news that the country’s largest retailer of laminate wood flooring is being investigated for selling laminates with unacceptable levels of formaldehyde (See the story here).

There are federal and state guidelines as to what levels of formaldehyde are considered “safe”. Now I’m not sure how much formaldehyde gas the Fed says I can safely have in my home, but any gas that increases the risk of chronic respiratory irritation, asthma and cancer, I would want at zero.

One of the many attributes of porcelain tile is…they’re inert!

Tile is not glued together, and no formaldehyde or toxic substances are used in production.  Porcelain is fired to over 2,000 F, burning off most impurities.  Porcelains do not contain or release toxins.

So, in addition to being water-PROOF, stain-PROOF, and termite-PROOF, we are now aware that porcelain woods are formaldehyde-FREE, providing a safe, beautiful option to laminated woods.

Stop by our Scottsdale Showroom to check out the newest 48″ porcelain wood planks, MAXIWOOD. 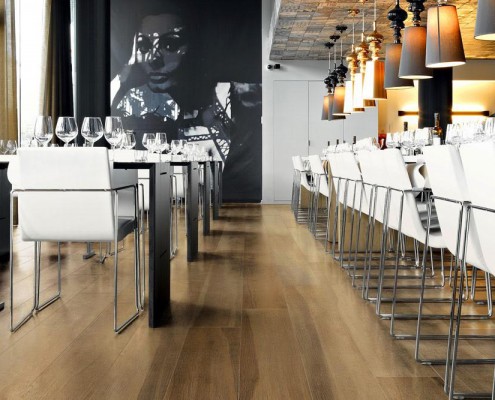 There are some really authentic looking wood planks, but you’ll be impressed with the au natural look of Naked Wood Porcelain Planks, exclusively from Villagio.

It’s not enough to touch the face of Naked Wood, it’s only when you flip it around to it’s backside that you’ll be shocked to see it’s porcelain, not wood planking!

Knots, natural woodgrain, and the appearance of multiple widths. The only thing missing is that freshly sawn wood smell.

Just one of the brand spankin’ new product lines recently added to the Villagio showroom.

Come by our beautiful Scottsdale Airpark location and take a look. 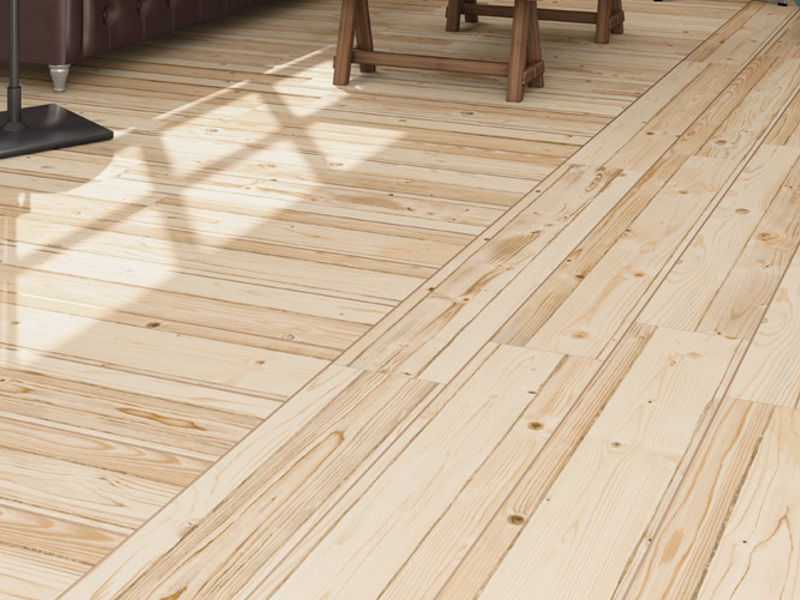 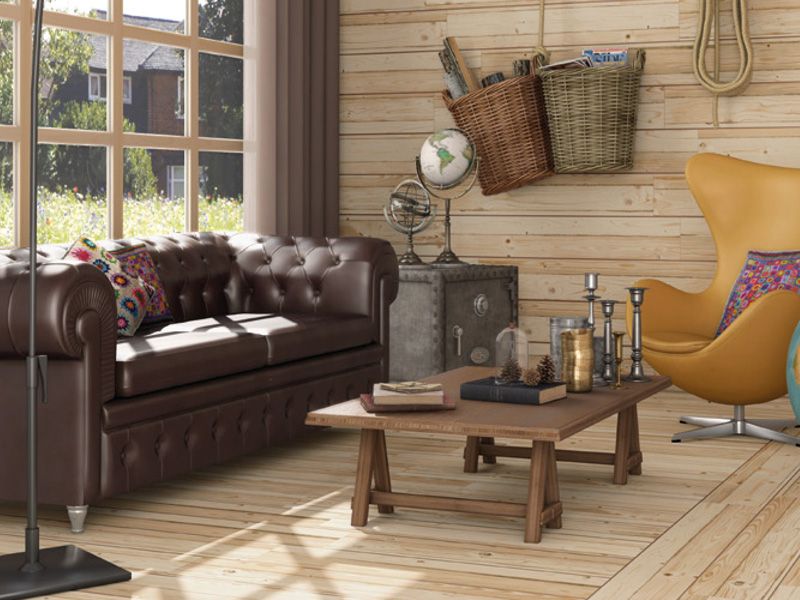 Part 1: From the beginning of recorded history

The story of ceramics first began in Anatolia, a land which has been home to countless civilizations over the millennia; and where modern Turkey comes into being; in whose fertile soil different cultures have flourished; and which has witnessed the most important turning points in human history.

Ceramic tile is made from similar clays found in pottery, statues and objects of art and religion. Clay objects have been found in many archaeological discoveries. The earliest pottery was primarily functional in character, in the form of vessels to hold the grain and other foodstuffs, which they produced, but clay was also used to make objects of religious significance. In time people learned to control the firing process better, and so produce ceramics of finer quality.

Invention of the potter’s wheel

While potters experimented with new forms, a new style of decoration consisting of the basic geometric motifs that were to be used for hundreds of years evolved. The discovery of the potter’s wheel in Mesopotamia and its introduction into Anatolia around 3000 BC opened a new era in ceramics production.

The use of tiles for wall and floor coverings existed in Egypt as long ago as 4000 BC and by 900 AD decorative tiles had become widely used in Persia, Syria and Turkey. As transport and communication developed, the use and manufacture of tiles spread across Italy and Spain and exports were made into the rest of Europe by the end of the 12th century.

Gradually the industry developed into a modem, highly mechanized process, becoming more concentrated in the Staffordshire Potteries (England) area where the established skills and processes of the traditional potters greatly fostered the development of the present ceramic tile. Tunnel kiln firing cycles were measured in days.

The turn round time of a tile bottle oven was at least ten days. In the latter half of the 19th century the forerunners of the present tile manufacturers began to patent a number of different processes for producing ceramic tiles. By the end of the century it was said that no home, public building, hotel or institution was complete without ceramic tiles.

During World War ll many companies were closed and a very different industry emerged. The market- place in the 50’s and 60’s demanded near- perfect quality, sizing and shading.

A technology known as “roller hearth” now provides the latest generation of kilns. Tiles are conveyed through the kiln as a single layer on a bed of rotating rollers. Only the tiles need to be heated, there are no kiln cars and no supports. Clean natural gas enables burning to take place immediately adjacent to the ware, both above and below, with very precise temperature control. This precise control, together with powerful hydraulic presses, has made possible the manufacture of a new product: the “homogeneous” or “porcelain” fully vitrified tile. Homogeneous tile is impervious, very strong and suitable for very heavy-duty purposes. Roller hearth single layer technology necessitates much shorter firing cycles to achieve required output. One hour, or less, is now typical. Today’s products are mostly mass-produced, to extremely high standards of design and quality.

2. Variation from shade to shade (die-lot)

This is the toughest shade variation to anticipate. This variation is the “die-lot” or “shade” variation is inherent in producing a “unique” product. The best way to handle this type of variation is to keep a range of “acceptable” shades of tile in a bin. As each new shipment is received, the new tile is compared against these “key” tiles. If it is distinctly similar, the tile goes into stock. If new colors have been added or deleted or if the tile is questionable at all – it goes to the sales manager for approval. If the difference is significant – the sales manager should have all showroom samples changed out, including all customer samples on display.

3. Variation from tile to tile

“Ceramic tile bodies and glazes are created from elements of the earth – clay, water, sand, minerals. Just as these materials vary in the natural world, the end result of their combination will also produce variations in the surface color and texture of ceramic tile. These natural color variations and markings enhance the individuality of each tile and result in a sophisticated but understated design sensibility that characterizes each tile and is designed to provide maximum performance and classic good looks.”